Space cadet or journalist? The Walkie-Lookie of the 1950s looked like it was straight out of a bad sci-fi film.

In 1947, a reporter for Popular Science asked RCA’s Vladimir Zworykin if he thought it would be possible to “equip news reporters with lightweight television cameras that would allow them to broadcast on-the-spot views of accidents, fires, train wrecks and similar news events.”[1] By way of explanation, Zworykin pointed to a television camera that RCA developed for use during World War II for use in a television-guided bomb. That particular instrument, the journalist proclaimed, “may well be the forerunner of the newscaster’s ‘walkie-lookie,’” a visual analog to the WWII SCR-300 (nicknamed the walkie-talkie), a portable radio transceiver created by Motorola for the War Department.

RCA’s television guided bomb used a miniature image orthicon, a sensitive camera pickup tube that was developed explicitly for military reconnaissance.[2] While the image orthicon was much more sensitive than the iconoscope (the television camera that preceded it), it still was not ideal for the one-person portable system that Zworykin dreamed about. As researchers in RCA’s Princeton laboratories shifted from war-time research projects to peace-time ones in the late 1940s, however, they still had contracts with the US Signal Corps to develop a portable television system, and Zworykin initiated a research program in the industrial television department to develop something similar for industrial use.

At the same time, a research group at RCA led by Paul Weimer began to develop new kinds of television camera tubes. These tubes, developed experimentally in 1950, and used commercially in 1952, were called vidicons. Earlier camera tubes like the iconoscope and image orthicon relied on the principle of photoemission, but the vidicon worked on the principle of photoconductivity. This, engineers reasoned, would allow for more sensitive tubes that could operate in lower light, and be smaller than their earlier iterations. Also, in the words of the engineering team that created it, this new tube would “permit such simplification in pickup tube design as to open up entirely new fields of application.”[3] Not long after the development of the vidicon, RCA began creating small camera units, first stationary ones, but in March of 1951, RCA Labs finally created Zworykin’s dream system—a portable camera and pack unit that included its own transmitter and battery and could send out a television signal. The prototype was unveiled at that year’s Institute of Radio Engineers conference.[4]

Early tests for the system were carried out in February of 1952 at the Aberdeen Proving Ground in Maryland, since much of the research for a portable lightweight television camera system had been done under contracts from various branches of the US military and the National Defense Research Committee.[5] Those initial tests were not open to the public, though RCA later joined the Army Signal Corps in publicizing military television in a program called “Combat TV”. The public got their first glimpses of the technology later that year, though, at the Republican and Democratic National Conventions.

The 1952 presidential conventions were particularly important moments in the history of television technology. At the Republican National Convention (which went first that year), NBC created the most complex array of television and radio facilities ever assembled. It was the first time the convention would be televised in color and in real time from coast to coast. Pulling the whole thing off took 6 weeks of planning, 2 million dollars’ worth of equipment, and a 300-person staff, all supplied with the latest equipment. Part of that equipment was the portable TV camera-transmitter that had been Zworykin’s dream for years, and it had finally made its television debut under the name Walkie-Lookie.

The Walkie-Lookie followed in the footsteps of a tried-and-true RCA tradition—putting a handle on something heavy and calling it portable. While the camera itself was only 10 pounds, the backpack transmitter was a sweat-inducing 50 pounds! Luckily for the three NBC journalists who were assigned these cameras, though, this was also the first presidential convention that enjoyed the benefits of another recent innovation, electronic air conditioning. 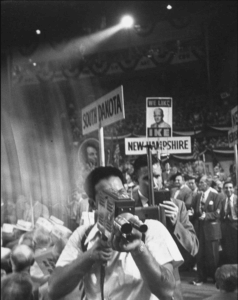 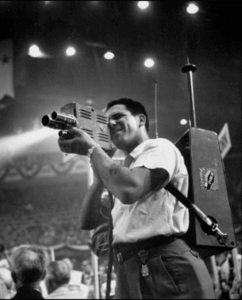 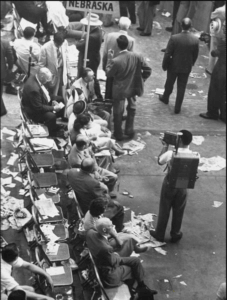 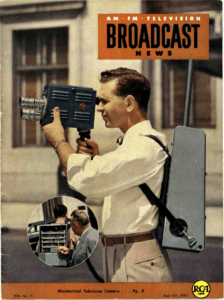 The Walkie-Lookie also represented a turning point for TV journalism. For the first time, it was possible for commentators and observers to extend the scope of their coverage into areas where standard cameras could not go. An NBC press release for the system promised that this device would “bring home viewers within elbow reach of delegates [and … ] important leaders in hotel rooms, corridors, and other locations where news is breaking.”[6] A Popular Science article about the convention was a little more descriptive about it. They suggested that the walkie-lookie would “make it possible for TV watchers to pursue a presidential candidate right up to the door of his bathroom, practically the only dependable refuge he’ll have from the inquiring gaze of half the nation. […] A reporter with a walkie-talkie-lookie can follow a subject anywhere that the subject is able to go—a thought to chill almost anyone, let alone the average politician.”[7] It was probably this quality that earned the item its unofficial nickname, the Creepie-Peepie.

The backpack transmitter on the Walkie-Lookie sent live signals to a nearby television station antenna (it had a range of a little over half a mile), and thanks to the network of microwave relays and coaxial cables, the images and sounds from these portable cameras were sent across the country to the close to 72 million people who watched the conventions on television. Also, unlike most single-lens TV cameras of the era, the Walkie-Lookie’s camera had three interchangeable lenses—a normal one for close-ups, a wide angle one for group shots, and a telephoto lens for distance shots. It also had a miniature viewing screen inside the camera to serve as a viewfinder for the journalist.[8] Sound came through the RCA “Radio-Mike” that the reporter carried around his wrist, and the Walkie-Lookie could operate for about 90 minutes on its (rechargeable) battery.[9]The Walkie-Lookie was such a success at the 1952 conventions that it was invited back in 1956. By then, the Walkie-Lookie had been redesigned, and it was much sleeker than its previous iteration. Engineers replaced half of the set’s vacuum tubes with transistors. As a result, the pack got smaller—not just because transistors take up far less space than vacuum tubes, but because they also require less power. The bulk of the 1952 Walkie-Lookie was taken up by the battery necessary to provide it with power. By transistorizing a portion of the set, the overall power consumption was cut in half, and so was the volume of the backpack transmitter. The weight went down dramatically as well—it was only 15 pounds, down from its 50-pound predecessor. 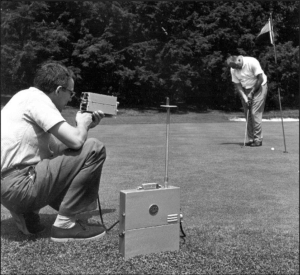 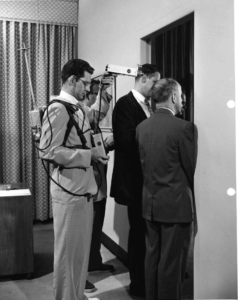 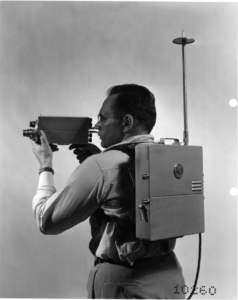 Back view of the experimental 1956 portable camera 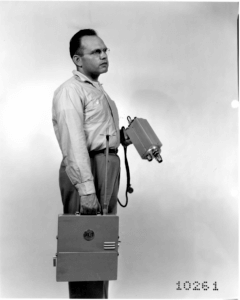 For the 1956 conventions, the device even had a new name (perhaps to shake off the Creepie-Peepie moniker). It was called the Minicam. And it certainly lived up to its name—the camera was only 5 inches long and weighed 1.5 pounds. The well-equipped 1956 NBC reporter covering that convention also had another tool in his arsenal—the Porto-Vision, an ultra-portable television receiver. Using this, a reporter could moderate impromptu mini-debates or discussions, with one politician in person, and the other as a talking head on the Porto-Vision’s screen. Viewers at home would be able to see the resulting distanced debate as a split screen, though chief of the NBC news department, Bill McAndrews, warned that NBC “had to be careful and not drive viewers crazy with too many trick shots. There’s … the danger of getting gimmick-happy and forgetting the story.”[10]

Over the years, portable television cameras became ubiquitous at political events. Though the Walkie-Lookie was, in its earliest iteration, large, cumbersome, and impractical, it ushered in a new era of political reporting. Bill McAndrews, speaking in 1952 about the debut of the original Walkie-Lookie, said in an interview: “I don’t think the politicians realize that they’re playing with dynamite,” in allowing cameras to record their every move, “but that’s just what they’re doing.” But he was also hopeful about the power of the new medium to bring politics to the people and promote a healthy democracy. He continued, saying “TV has a peculiar quality of showing up a politician’s bad qualities as well as his good ones. TV will, in short, show the candidates as they really are.” [11] Now, when everyone has the ability to broadcast live using electronics small enough to fit in their pocket, we see the culmination of decades of work in miniaturization and portability. Let’s hope that electronics of today and tomorrow continue in the long tradition of helping people make informed political choices.

[3] Paul Weimer, Stanley Forgue, and Robert Goodrich, “The Vidicon—Photoconductive Camera Tube,” in RCA Review, September 1951, p. 307 (reprinted from the May 1950 issue of Electronics).

← Lecture Series: Sunday at the Sarnoff
Item of the Week | “My Second Most Prized Possession” Advertisement →
Top