From April 12 through May 11, 2012, a special exhibition of artifacts from The Sarnoff Collection was presented in the TCNJ Library to commemorate the 100th anniversary of the sinking of the Titanic, an event in which David Sarnoff played a significant role. Below are texts and images from that exhibition.

In 1912, Sarnoff was assigned to manage the Marconi wireless station at the Wanamaker department store in New York City, which led to his participation in a pivotal moment in the history of communication. On the evening of April 14th, 1912, the ocean liner Titanic struck an iceberg and started taking on water. Almost immediately, the ship began transmitting distress signals. Soon the airwaves were flooded with news of the disaster as operators tracked the rescue effort. Sarnoff played an important role throughout the crisis  After three days at his Wanamaker’s post, he traveled to Marconi’s Sea Gate station on Coney Island. While there, he contacted the steamship Carpathia, which had picked up survivors from the Titanic and was returning to New York. Sarnoff proceeded to compile the names of these passengers and forward the good news to their families.

The sinking of the Titanic brought radio into the public spotlight and prompted Congress to regulate the medium for the first time. Sarnoff would refer to the incident as an important turning point in his career. “The Titanic disaster brought radio to the front,” he later recalled, “and incidentally me.” 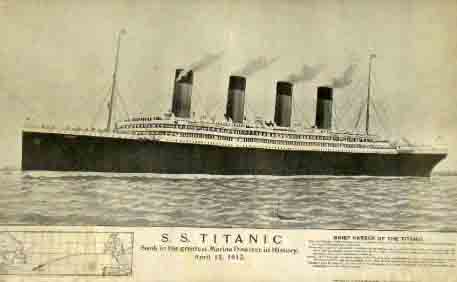 When it departed from Southampton en route to New York, the Titanic was the largest, most luxurious steamship in the world. It was also furnished with state-of-the-art electrical equipment, including incandescent lighting, shipboard telephones, and a wireless transmitter capable of contacting stations hundreds of miles away.

Upon learning that the ship had struck an iceberg, the crew’s two wireless operators sent out distress calls, alternating between the original international emergency signal “CQD”  and the recently introduced “SOS.” The Marconi station at Cape Race, Newfoundland acknowledged the news almost immediately; however, only one nearby ship, the Carpathia, received the message. Other vessels were closer, but they either had no wireless sets or their operators were off-duty. 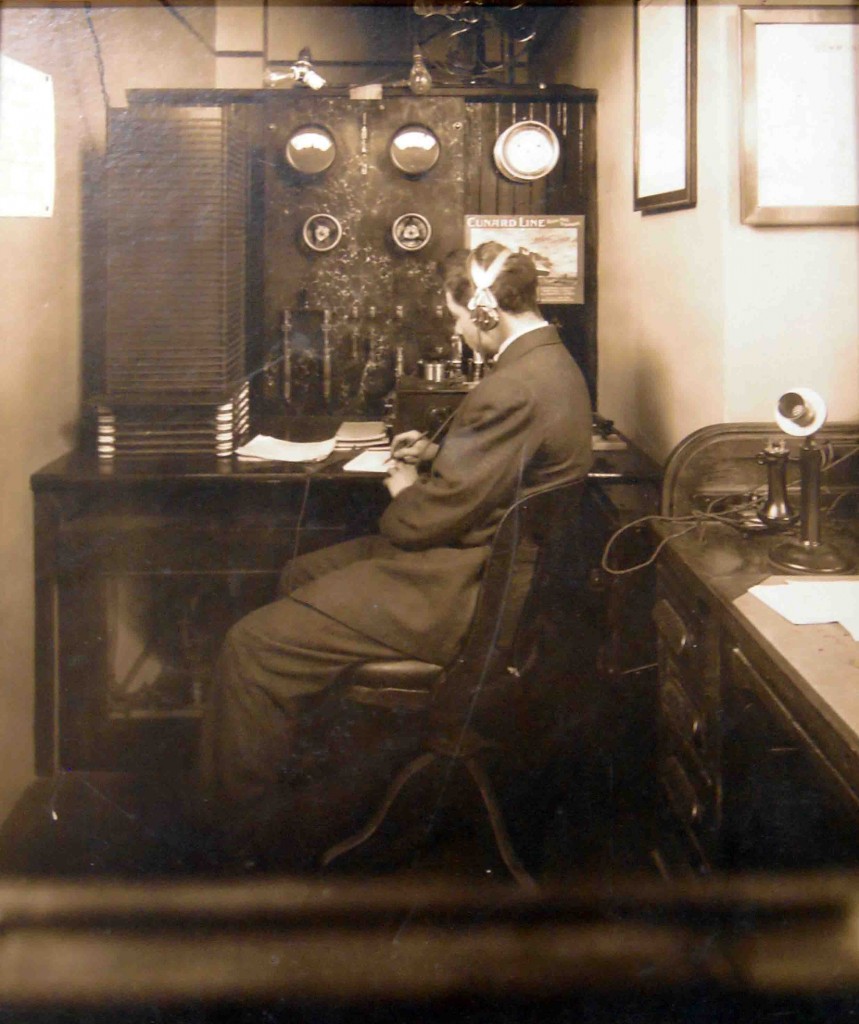 This photograph, which was most likely taken shortly after the Titanic disaster, shows twenty-one year old Sarnoff at the Wanamaker wireless station. Sarnoff considered the event to be one of the formative moments of his career. Later in life he recounted that he had been on duty by himself when the ship sank and that he was the one who notified reporters of the disaster.

Contemporary press coverage suggests that Sarnoff did not man the station until after word of the disaster arrived from Cape Race and that he was assisted by two other operators. Together, the three men worked non-stop over the next seventy-two hours to obtain and relay the names of survivors.

According to Sarnoff, this is the telegraph key from the wireless station at the John Wanamaker department store in New York City that he used to send messages during the Titanic disaster. In its early years, radio was referred to as “wireless telegraphy,” as most equipment could not transmit the human voice and messages were sent via  Morse code. During the early 20th century, wireless stations were set up in major commercial venues like Wanamaker’s, as much for publicity purposes as for communication between stores.

Department of Commerce and Labor, 1913

While the sinking of the Titanic showcased radio’s potential value as a life-saving technology, it also raised questions about the need to control its use. The lack of clear guidelines concerning shipboard wireless equipment and interference from amateur operators had hindered rescue efforts and cost lives.

Congress, which had previously hesitated to regulate the airwaves, seized upon the disaster to pass the Radio Act of 1912. This law divided the electromagnetic spectrum between amateur, government, and commercial users and mandated that all American operators, even experienced ones like David Sarnoff, had to be licensed. To accommodate the demand for trained wireless experts, the Marconi Company recruited Sarnoff to act as an instructor at a newly organized technical institute.

In the summer of 1912, representatives from forty-five countries met in London to discuss international regulation of wireless communication. With the loss of the Titanic still fresh in the delegates’ memories, much of the discussion revolved around safety issues. In addition to affirming the principle of intercommunication—mandating that ships should be free to contact shore stations even when using a different company’s radio equipment—the conference established shared criteria to evaluate wireless operators and new procedures to respond to maritime distress signals. This silver salver from the Sarnoff Collection commemorates the International Radiotelegraphic Conference and is a reminder of the Titanic disaster’s long-term implications for the radio industry.