Are you a person of class, refinement, and taste? Do you live in the 1950s? Then perhaps a color television is right for you!

Although RCA had high hopes for color television when the company introduced compatible color TV in 1954, consumers had other ideas. Even in an era of mass consumption and general prosperity for middle class Americans, color TVs (which were 5 times as expensive as their monochrome counterparts) remained out of reach for ordinary Americans.[1] From the 1950s to the 1980s, RCA introduced several advertising campaigns to convince people to buy color televisions. Early advertisements stressed the system’s compatibility, but while backwards compatibility was a selling point for the FCC, who was worried about the immediate obsolescence of black and white sets, it proved an ineffective tactic for actually selling these products to consumers. After all, if you can see the rainbow in black and white, as one early advertisement pointed out, then why would you spend five times more to see it in color?

As the years went by, RCA still did not see a return on its investment into developing color. In 1959, only an estimated 1 percent of all television sets in use in the United States were color, and owners were either employees of RCA or NBC, or wealthy early adopters. That year, R. H. Coffin, RCA’s vice president of advertising, introduced a new advertising push that would target wealthy Americans who were not early adopters, but who could be persuaded to buy into this new technology. Central to Coffin’s plan was the “My Second Most Prized Possession” campaign. These print ads would be placed, according to Coffin, “in the ‘class’ magazines” like The New Yorker, and explicitly target the suburban middle classes desperate to keep up with the Joneses’.[2] These ads featured famous (and wealthy) color TV owners who, as the ad put it, “lead the colorful life.” 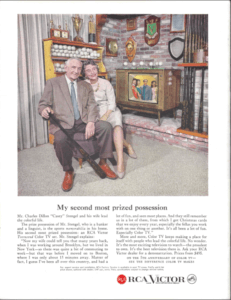 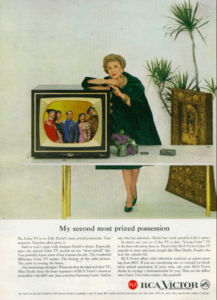 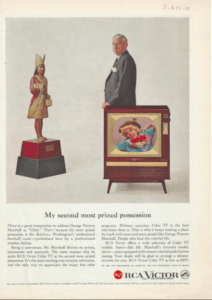 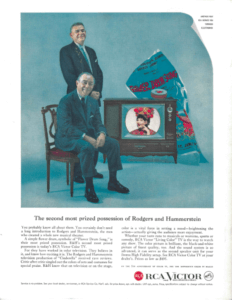 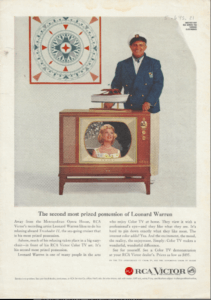 The campaign featured made conspicuous consumption the main draw of buying color TVs. They explicitly showed wealthy people with possessions far out of reach of ordinary Americans. The fashion designer Lilly Daché, for example, owned an ornate gold Nepalese altarpiece, but she also owned an RCA color TV. And, the copy on the advertisement quickly pointed out, it was the cheapest color model that RCA made. It was, as the copy continued, “just a matter of [Daché’s] personal taste. And no one who has admired a Daché hat could question Lilly’s taste.”[3] Consumers might not have been able to afford a Nepalese artifact, or even haute couture millinery, but they could, like Daché, have “pride in owning the finest.”[4] The other variants made similar claims. Opera singer Leonard Warren liked to relax on board his yacht, but also “in a big easy-chair in front of his RCA Victor Color TV set.”[5]

While these advertising campaigns may have helped move a few hundred color television sets, it wouldn’t be until the late 1960s (when TVs were no longer so expensive that they would be a person’s second most prized possession) that color television became a mainstay in American homes.

Learn more about the history of color television in our online exhibit, In Living Color

← Item of the Week | The Walkie-Lookie
Top