Join us at the Sarnoff to hear historian Angela Cope’s lecture Summertime, and the Living is Plastic: PVC and the Creation of a Summer Toy Industry

There are few things that embody Daniel Miller’s theory of “the humility of things” (1987) as completely as small, plastic toys. It is an odd proposition to realize that plastic usage in toys is written off despite its present ubiquity  (one would be hard pressed to find a toy without some components of plastic on the shelves of a major retailer), early adoption of the material (amongst the earliest examples of both semi-synthetic and fully synthetic uses were toys – the “original” creation of cellulose nitrate was to replace the use of ivory in billiard balls in the 1850s) and its relatively large role in the explosive years of growth the industry experienced post war.

Polyvinyl Chloride, or PVC for short, is one of the more contentious plastics, its manufacture being linked to the mercury poisoning that caused the Minamata disease in 1959, and a rare liver cancer cluster amongst employees of American vinyl chloride factories in 1974. More recently, plasticizers to make PVC pliable have been implicated in endocrine disruption in the general population and skewed birth ratios in highly exposed subsets. And yet, PVC continues to be ubiquitous in toy manufacture, particularly in low cost vinyl inflatables for summer use.

This talk will trace the rise of vinyl inflatables and their contribution to the creation of a summer toy industry. The summer toy industry is unique to the postwar consumer republic, as the suburbanization and “backyard-ification” of play lent itself to the proliferation of above ground play pools and the toys to go with it. These toys are a direct result of a war industry focused on the creation of inflatable life boats and preservers, and have uniquely shaped the way that consumers participate in summer activities.  One begins to wonder if indeed childhood were not so readily plasticized, that the acceptance of plastic in adulthood would be so complete and unquestioning. While questions of causality are by no means answerable in this case, historian Angela Cope tells instead the story of how plastic – in particular, polyvinyl chloride – became so ubiquitous in childhood. 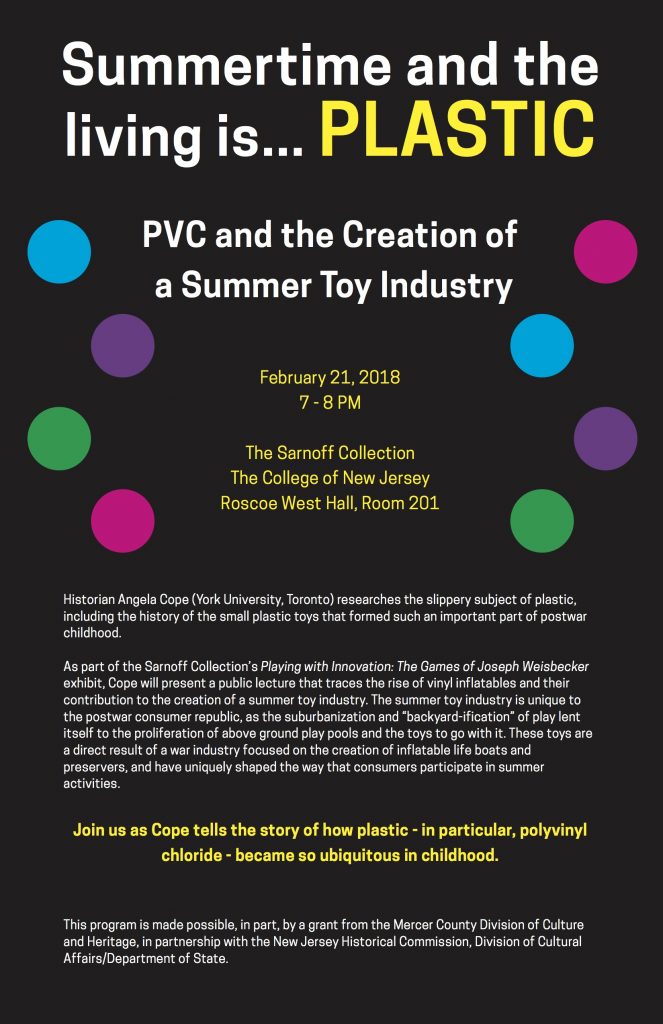