Explore space (exploration) in our latest blog post about a set of RCA commemorative matchbooks.

In 1957, a small team of scientists and engineers from RCA’s Advanced Technology Laboratories formed a research group to investigate the possibility of developing a magnetic recorder for the United States’ still-fledgling space program. In the following months, the Soviet launch of Sputnik and the US’s failed launch of its own satellite pushed the American space program into high gear. To meet the demand for high-tech equipment, in March of 1958, RCA formalized the smaller research group as the Astro Electronic Products (AEP) division of RCA Defense Electronic Products with the intention that this group would developing satellites and space vehicles. This was, as RCA’s president said in that year’s stockholders’ meeting, “the first unit of its scope and purpose to be established by any electronics company”[1]

The AEP was renamed as the RCA Astro-Electronics Division, and over the next few decades, it was instrumental in building dozens of satellites, including the TIROS-1, the first low-Earth orbital weather satellite. However, RCA Astro was also a subcontractor on larger space projects, including the Apollo program.

In 1973, to mark the end of the Apollo program, RCA created a series of commemorative matchbooks with images of the patches of each of the manned Apollo missions, and a list of RCA’s contributions to the Apollo program. 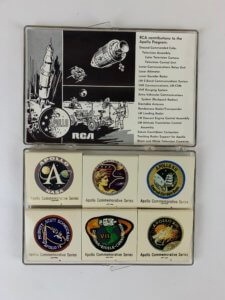 When General Electric acquired RCA in 1986, it combined RCA Astro with its own Space Systems Division to form the GE Astro Space Division. That in turn was sold to Martin Marietta in 1993, and after Martin Marietta’s merger with Lockheed to form Lockheed Martin, the latter announced that it would close the former RCA facility by 1998. After 40 years, the former RCA Astro Division closed its doors for good, but the contributions it made to the space age live on. 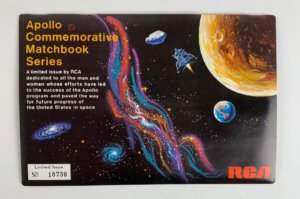 This artifact was donated to the collection from the estate of Rose M. Zuccarello

← A Scientific Mallard
Sundays at the Sarnoff: How the Vacuum Tube Created the Age of Electronics →
Top