Last week, we talked about a pair of A-10 transformers in a box of material that came to the Sarnoff Collection in 2009, and was given the catalog number S.496. We don’t know much about these components, or why they were stored together, but looking at them gives us a better sense of how someone at RCA Labs might have worked in the latter half of the 20th century, and gives us a glimpse into the workbench of an engineer.

And no workbench would be complete without a set of tweezers. No, that’s not because engineers wanted perfectly arched eyebrows– these tweezers are needed for working with small electronic components. Their non-magnetic tips keep electronics from picking up a magnetic charge which can be damaged by electrostatic discharge. Many of the tools in this collection was made by a company called B. Jadow Inc., who sold tweezers under the Vigor trademark.

B. Jadow made watches and watchmaking equipment, but in the late 1940s, they also began to sell the tools needed for the horological trade, tools that were also perfect for microelectronics work that became common in the era of solid-state devices. These types of tweezers were common enough that our mystery previous owner even inscribed his initials, AJV, on one pair.

Whatever happened to Vigor tweezers? Benjamin Jadow owned a jewelry shop in New York City before creating the manufacturing company B. Jadow, Inc. in 1929, to make watch components and tools. Vigor was the trademark they used for tweezers, pliers, screwdrivers, and other tools, mostly for the watchmaking trade, but they soon realized they had a large user base in both the hobbyist and laboratory market. 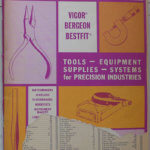 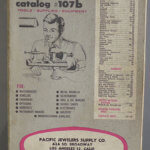 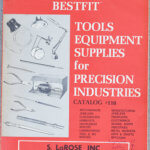 Sometime in the early 1970s, Benjamin’s sons, Julian and Henry Jadow joined the family firm, and B. Jadow became B. Jadow and Sons.[2] It was then that the company began to diversify, becoming especially interested in the manufacture of adhesives, including a cyanoacrylate-based adhesive that they initially called Arontite. After a patent lawsuit by the Loctite Corporation (which bought the cyanoacrylate patent from Eastman Kodak),[3] the company changed the name of their product to Krazy Glue, where it became an instant best-seller, even though the United States Consumer Product Safety Commission initially recalled Krazy Glue and other cyanoacrylate adhesives over safety concerns that they were too sticky, and could pose a threat to children.[4] Over the next few years, B. Jadow and Sons turned to other pursuits as well, including making plastic lenses, and fashion accessories, and commercial real estate. The Vigor trademark is now owned by the Grobet File Company of America, who still sell antimagnetic tweezers under the combined name Peer-Vigor.

← Item of the Week: United Transformer Corporation A-10 Transformers
A Conversation with Paul Lansky →
Top