To flatten or not to flatten? How did Edison answer that question? Learn all about it with our newest blog post on the Edison Diamond disc.

Even though it was eventually used to store music, the wax cylinder was initially used mostly for office dictation. A user would yell into the speaker of a phonograph, and a stylus would move up and down and create a physical (and re-playable) record of that sound. However, many saw the wax cylinder as a way to record not just the mundanities of the modern office, but also to bring their favorite musical artists into their homes. There was an immediate problem, however: the mass production of wax cylinders was no easy task. In the early years, artists had to be recorded singing the same tune or playing the same melody again and again until they had amassed enough cylinders. Certainly, artists were not going to go platinum with this system!

Difficulties in mass-production opened the door to other ways of creating music for the home (things like player pianos or music boxes), but it also led to a flurry of innovation to create a mass-reproducible phonograph record. Many people attempted to solve the cylinder reproduction problem by a variety of means: by acoustical copying, by using a pantograph, or through the use of a master cylinder mold. However, while both Thomas Lambert and Thomas Edison developed a relatively economical ways of mass-producing cylinders, neither method would prove to be as popular or long lasting as Emile Berliner’s idea of using a flat metal disc to create duplicate recordings on flat records.

At first, the sound quality from Berliner’s discs was a distant second to their cylinder counterparts, but in the early years of the twentieth century, both recording artists and consumers began to prefer the Berliner model. One by one, recording companies made the switch from cylinders to discs, so by 1909, Edison Records was the only major cylinder holdout. After all, Edison reasoned, cylinders provided better sound quality than flat discs. However, while he was not incorrect, consumers still preferred discs because they were cheaper and easier to store.

By 1912, Edison Records too bowed to the preferred format, and began to manufacture flat discs alongside their usual cylinder. However, they retained an important part of the earlier technology. The Berliner model of sound recording was lateral– that is, a stylus moved side-to-side in conjunction with the varying patterns of sound it was recording. Cylinders, on the other hand, were recorded vertically—that is, a stylus moved up and down with sound vibrations, creating a groove with a uniform width, but a varying depth. The Edison Diamond Discs, as these flat records were called, retained the vertical-cut groove of the cylinder. This allowed for a longer playing time (up to 5 minutes) and a superior sound, but it also meant that the disks were much thicker— about 6 cm— and incompatible with most phonograph players of the era. Edison Records produced Diamond Discs from 1912 to 1929, when they ceased production of both discs and cylinders.

The Sarnoff Collection has three Diamond discs: Edison 50058, Southern Roses Waltz / Forosetta Tarantella (1913); Edison 50606, Daisies Won’t Tell / Put On Your Old Grey Bonnet (1919); and Edison 51030, Believe Me If All Those Endearing Young Charms / Carnival Of Venice (1924). The two earlier discs do not have paper labels on them; instead, the disc’s details were etched directly onto the disc surface. These labels were exceedingly hard to read, so by June of 1921, Edison introduced paper labels that contained the record’s information, but time has not been kind to the adhesive used on them. Many of these labels, including one side of our paper-labeled Diamond disc, have fallen off over time. 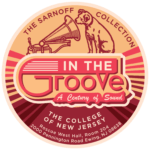 Want to learn more about the history of sound recording technology? Visit the Sarnoff Collection and see our newest exhibit, In The Groove: A Century of Sound. It will be open until December, 2019.

Do you have some cylinder phonograph records, Edison Diamond Discs or players, Edison Needle Type records, or records made by the Berliner Gramophone Co. collecting dust around the house? Consider donating them to the Sarnoff Collection, where they will be used to educate and inspire people about the history of technology for years to come. Email Sarnoff curator Florencia Pierri (pierrif@tcnj.edu) for more information.

← Opening Reception | In The Groove: A Century of Sound
Item of the Week: The Townley Radio →
Top