Look into my (magic) eye…

In the early 1930s, the American engineer Allen B. DuMont (who manufactured and sold the first commercially available and practical television set in the United States in 1938, a few months before RCA’s first set) developed a vacuum tube that gave a visual indication of the amplitude of an electronic signal. The tube, whose technical name was electron-ray indicator, was more commonly known as a tuning indicator, and the first commercial iteration was the RCA 6E5, which debuted in 1935, under the trademarked name of ‘magic eye’ by which this type of tube is most recognized today.

The tube is basically a miniature cathode ray tube (the same technology present in all television sets until the advent of flat-screen TV), internally amplified by a built-in triode signal amplifier.[1] The 6E5 has an electron gun in the tube that shoots a beam of electrons to the target, the cone-shaped plate at the top of the tube. The target plate is coated with a fluorescent coating—in most cases, a green phosphor—so that when the electrons hit it, the target plate glows, which shows up as a ring of green on the top of the tube.

One of the earliest uses for this tube was to give a visual indication of radio-frequency signal strength to determine if you had tuned your radio accurately to a station. They were thus put into many early radio sets, like the 1939 Mission Bell pictured below. (The Sarnoff Collection, unfortunately, does not have any radios that used this indicator tube). In radios, the ray-control electrode was connected to a radio’s detector stage, so that the voltage changed with the signal strength; the higher the signal, the narrower the gap. When the gap was at its narrowest, you were tuned to the precise frequency of that station. 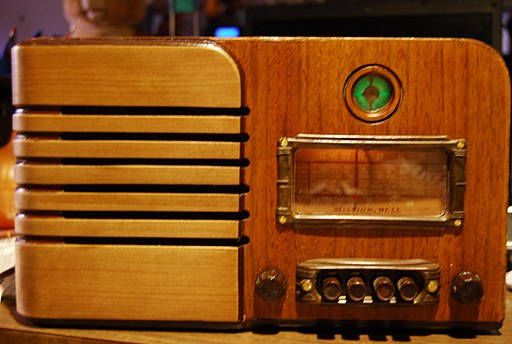 This file is licensed under the Creative Commons Attribution-Share Alike 3.0 Unported license.

The magic eye became a selling point for RCA, who eagerly touted it in advertisements for its radios. A 1938 ad for the Console Grand (RCA model 97KG) shows the characteristic green glow of the magic eye on the radio console, and catalogs for RCA Victor products all mentioned the availability of the magic eye tuner, which they called “the most accurate known method of manual tuning,” and a feature that would make silent tuning possible.

The name itself came from an earlier RCA trademark, the “Magic Brain,” a high-end combination radio phonograph, and this magical designation was used for other products and developments. Later improvements in sound technology were called the Magic Voice, and of course, these radios were used to listen to the Magic Key, a popular radio variety show broadcast on the NBC Blue Network. All of these names were no misnomers—to many in the early 20th century, the profound changes in communication technology were indeed magical.

Text by Florencia Pierri, with technical assistance by Jonathan Allen

[1] How a triode works: A basic triode consists of three elements: a cathode, a grid, and a plate (the anode). In a triode signal amplifier, a filament heats up the cathode, which releases electrons into the vacuum of the tube. The negatively charged electrons are attracted to the positively charged plate, and flow through the grid to get there, creating an electric current from the cathode to the plate. This current can be controlled by the voltage on the grid. By driving the grid less negative, more electrons are attracted from the cathode, which allows the plate current to increase. There is usually a resistor in series with the plate, so a small change in grid voltage can cause a large change in plate voltage, resulting in amplification.