In 1876, Thomas Edison opened his Menlo Park laboratories. That same year, Alexander Graham Bell demonstrated how to electrically transmit the human voice. Edison recognized the advantages the telephone had over the telegraph, but the latter offered one convenience—the ability to record and store the message that was sent. There was no way to capture a telephone message. Edison, sure that the telephone would never catch on unless there was an easy way to store telephonic messages, invented the phonograph, a device that converted sound vibrations into etchings on the surface of a tinfoil-wrapped cylinder.

After users proved happy to use telephones even though there was no record of the conversation, Edison imagined that his device could be used for recording speech in an office setting, especially given the phonographic record’s low fidelity and limited playback ability. Edison didn’t intend these machines to record and playback music. It was Alexander Graham Bell who improved on Edison’s original idea and lined the recording cylinder with wax, creating an improved talking machine called the graphophone. Others, including Edward Easton of the newly established Columbia Phonograph Company—and even Edison himself—began to use wax cylinders in this improved phonograph.

When Emile Berliner developed a new way of storing music on flat discs rather than cylinders in 1887, he named his flat record player the Gramophone. He went into business in the United States in the 1890s, first with the American Gramophone Company and later with the United States Gramophone Company, although neither business  was very successful because the gramophones themselves were either hand cranked or used a noisy electric motor. Berliner partnered with Eldridge Johnson, the owner of a machine shop in Camden, NJ, to develop a wind-up spring motor for the gramophone. Johnson helped to create the Consolidated Talking Machine Company in 1899, which he renamed the Victor Talking Machine Company in 1901. When it first went into business, the Victor Talking Machine Company sold machines that were based on Edison’s original phonograph. Though the shape of the disc was different, the speaker mechanism was the same– a large external metal horn. This horn featured prominently in their  own logo, which depicted Nipper the fox terrier listening forlornly to his master’s voice emerging from the metal horn of a Victor talking machine. Initially, these record players with Johnson’s patented spring motors were called Talking Machines, or Victors, to distinguish them from the noisier or more cumbersome Berliner Gramophones, but in 1906, the Victor Talking Machine Company came out with its first Victrola. 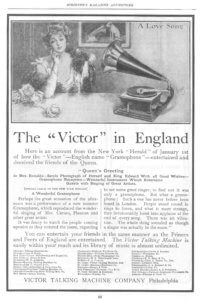 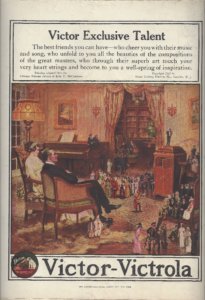 In December, 1905, the Victor Talking Machine Company registered the trademark “Victrola.”[1] It wasn’t until September of the following year, however, that the public learned what a Victrola was– a hornless phonograph. Once the needle was placed on a spinning record, the sound waves traveled through the diaphragm and down into a specially designed sounding board inside the cabinet. The resulting sound was mellower than that which came out of a metal horn, and the design also allowed for a built-in way to modulate volume:  by opening or closing the cabinet doors, the sound would become louder or softer.  Despite the commercial success of phonographs of all stripes, people by and large did not like the large horn that came with them. The Victorla eliminated that eyesore, and was an attractive piece of furniture as well. As one news article put it, the Victrola was “something entirely new in talking machines […] and will prove popular with those who have the price.”[2] And the price was a sticking point indeed– the 1906 Victrola retailed for  $200, equivalent to the purchasing power of $5,510 in 2020.

At that price, they were too expensive for most families, and Victor only sold 506 Victrolas in 1906.[3] A few years later, Victor began selling cheaper models of this phonograph, starting with the Victrola IV. That model, which debuted in 1911, was one of the cheapest phonographs on the market, and a huge seller for the Victor Talking Machine Company. A few months later, they debuted the Victor Victrola VI, which was a slight upgrade on the earlier model with a better spring motor and a slightly larger cabinet, and sold for $25. Even these models were not cheap– that’s the equivalent of $675 today, but they nevertheless proved to be one of the Victor Talking Machine Company’s most popular models, with more than 700,000 units manufactured between 1911 and 1925.[4] This model proved especially popular during WWI, where they were sent to military camps and, with specially recorded discs, used in telegraph training.

The Sarnoff’s Victrola VI was donated to the collection by longtime volunteer Dr. Jonathan Allen. Based on the serial number, this machine was one of the 90,500 manufactured in 1920. Although sales for Victrolas and other Victor Talking Machine products were strong in the early 1920s, by the middle of the decade, radios like the Aeriola Sr. were cutting into phonograph sales. After declining sales, Victor discontinued the VI to focus on other lines, like its Orthophonic Victrolas and Electrolas. In 1929, RCA purchased the Victor Talking Machine Company, and used the Victrola name for electrically amplified phonographs. Though the original Victrolas are things of the past, it is a testament to Victor’s workmanship that Victrolas like ours are still functioning as well as they were when they were built a century ago. The next time you’re at the Sarnoff Collection, listen for yourself– our Victorla is still playing tunes every Wednesday and Sunday!