On the trail of the World’s Smallest Giant Brain: tracing the identity of an object across two archives

When the David Sarnoff Library in Princeton, NJ closed in 2009, the items it contained were separated. While the College of New Jersey acquired the artifacts, the majority of the documents—thousands of linear feet of publications, lab notebooks, photographs, and other papers—went to the Hagley Library in Wilmington, DE (the processing work was recently completed, and you can learn more about it here). This means that sometimes, some of the materials in our collection don’t have the context that allows us to fully understand them. In preparation for our new exhibit, Playing with Innovation: The Games of Joseph Weisbecker, I came across one of these items—a wood and plastic apparatus similar to a tally counter, but with two buttons to advance the numbers. For want of a more accurate label, it was entered into our catalog as S.226.75, Unidentified Game Piece, but in my mind, it was always the Red Clicky Thing (RCT). I wasn’t sure what the RCT was for, what it meant to do, if it was fun, or even if it was part of a game at all. But, as with any other unidentified red object with buttons, I couldn’t help but keep pressing down its levers, wondering what pattern governed the seemingly random advancement of numbers that each click brought. It was a curious itch that—at the moment—I could not scratch, so with its new accession number, I put the RCT in its corresponding box, nestled with other examples RCA engineer Joseph Weisbecker’s many analog computer games.

A few weeks later, after all of the game prototypes had been cataloged and I identified the pieces that would be put on display for the new exhibit, I went to see the Hagley Library’s Weisbecker Papers to flesh out my understanding of these games and the engineer who made them. There, I was met with a treasure-trove of documents: photographs of Weisbecker’s children playing with the games that would soon be put up behind our Plexiglas cases, correspondence with game companies and his patent lawyer, and detailed building specifications of most of the game prototypes in our collection. While riffling through these game specifications, I was surprised to find an advertisement mock-up for the RCT, whose correct name was World’s Smallest Giant Brain. “Match wits with a computer,” the copy read. “This tiny computer plays against you, you and the computer take turns, first to get to 9 wins! Show your friends how to beat the computer and watch them lose.”[1] Another folder revealed the technical specifications and the design of the interior.[2] Finally, the mystery of the Red Clicky Thing had been solved. 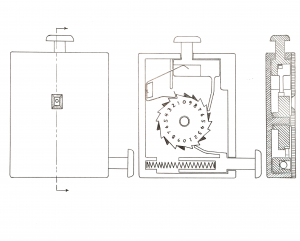 A number puzzle game, the piece was played between a human (the first lever on the device) and the “computer” (the second lever), with each player taking turns to try to get to the number 9 first. The game was designed so that the human would win only every other game. The idea was that a person would carry it in her pocket, demonstrate how to beat the computer, then hand it over to her friend, who, thanks to the arrangement of the interior springs, would always lose. While the instructions promised that “you should have many hours of fun with THE WORLD’S SMALLEST GIANT BRAIN,” Wesibecker was ultimately unsuccessful in convincing game companies of this.[3] Some toy executives, like Lawrence Hansburg of the E.S. Lowe Company (of Bingo and Yahtzee fame) were initially interested, but in the end, all of the people whom Weisbecker approached eventually decided that the game was too simple, and the puzzle too easily solved, for it to be commercially viable.[4] Despite that, it found at least one user for whom it provided hours of fun, even if it was only the fun of the archival chase.

To find out more about the David Sarnoff resources at the Hagley Library, check out their finding aids.